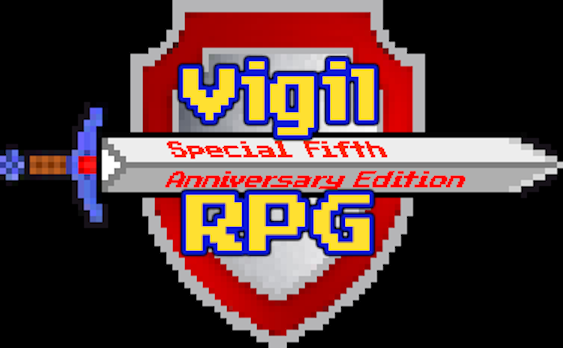 The tips on this page are progressively-increasing spoilers for the secrets of how to defeat certain enemies in Vigil RPG. Reveal as little or as much information on each enemy as you'd like -- it's up to you!

Q: Help! A giant rat is biting me for a lot of damage!

First of all, welcome to Vigil RPG, and thanks for checking out this FAQ!

In Vigil RPG, every enemy in the game has "tells" and/or attack patterns which, once you have learned to recognize them, make it possible to defeat the enemy without the enemy being able to successfully land any strong attacks on you.

In the case of the giant rat, in some combat rounds, instead of the rat attacking you, the text displayed on the combat page will state that the rat's eyes are glowing red.

That's your cue to hit the Defend button instead of attacking that round. (Unless, of course, you can defeat the enemy with your next attack, in which case, go ahead and attack!)

The presence of the giant rat enemy in the game -- one of the very first foes you encounter -- is, of course, an intentional play on the trope that every fledgling hero needs to start out by slaying some rats! 🐀🗡

Q: How am I supposed to hurt the Wererat King?

The Wererat King is tough to damage. His high armor mitigates most of the damage from physical attacks. Worse, his staff absorbs your spell attacks, filling up the King's own MP, which he then uses to punish you with a spell of his own!

However, if you watch the combat text closely, there may be a way to work around the magic-absorbing effects of that staff, with good timing...

Don't forget to stop at the nearby Fairy Spring to recover some HP just before the fight!

Watch the combat text closely for a mention of the light fading from the Wererat King's staff.

When you see that "light fading" message, immediately use your strongest spell attack!

It's also safe to use a spell attack on Round 1 of the combat, as the Wererat King will not have activated his staff yet.

Using your magic at each opportunity where it's safe to do so -- and only at those times -- you should be able to prevail!

The Wererat King's magic-absorbing staff ability was inspired by the signature ability of the character Celes, "Runic", from Final Fantasy 6.

Q: What's the deal with the Duagoyf? It unleashes powerful attacks without giving any kind of "tell"!

The Duagoyf is a weird enemy, all right. It has two main attacks: One that hits for minimal damage, and a significantly stronger-hitting double attack.

There is a way to perfectly predict -- and even control! -- when the Duagoyf will perform its powerful attack!

However, unlike most Vigil RPG enemies, the way to predict the Duagoyf's big attack isn't anything that appears in the combat text. It's some other value that appears somewhere on the combat screen...

Think about what's common about the following:

When some characteristic of the Duagoyf itself is an odd-numbered value, it'll perform its strong attack.

Occasionally, the Duagoyf, instead of attacking you, will spend its action to hit itself for 1 HP of damage! Now why would it do that?

The Duagorf will perform its strong attack whenever its HP total is an odd-numbered value. This check on the HP total is performed after the hero's attack.

Therefore, you can force the Duagoyf to only ever perform its weaker attack by ensuring that after you attack, the Duagoyf's HP will be an even-numbered value.

When the Duagoyf's HP is even, it'll occasionally hit itself for 1 damage, instead of attacking the hero, in an effort to set its own HP to an odd number. Therefore, don't just repeatedly use attacks that deal an even number of damage once you've got the Duagoyf's HP at an even-numbered value; keep paying attention!

The Duagoyf's name is a combination of the prefix "du-", meaning "two", and the suffix "-goyf", which is used in Magic: The Gathering for creatures with attributes that are based on some meta-aspect of the game state, such as the Lhurgoyf!

Q: The tank goblin is blocking all of my attacks!

The Tank Goblin is among the most defensively-oriented enemies in the game. It spends most of its time either defending itself, or just poking at you. Only rarely does it wind up for a big attack.

With most Vigil RPG enemies, when the enemy indicates that it's about to unleash a big attack, that's your cue to defend. But the Tank Goblin may require a different approach...

When the Tank Goblin raises its weapon high for its large attack, instead of defending, take that opportunity to immediately counter with a weapon attack of your own! The Tank Goblin's big attack will be interrupted, and your attack will bypass its armor.

Ideally, if you have it, equip and use the Sunder! attack. In other situations, the Tank Goblin will block it, but if you use it in this situation when the Tank Goblin is momentarily vulnerable, Sunder! will do is job of reducing the Tank Goblin's armor, letting you win the battle more quickly.

The main inspiration for the current version of the Tank Goblin is the enemy character King Hippo from the NES game Mike Tyson's Punch Out!!.

The Tank Goblin got a major redesign for the (current) 5th Anniversary update to Vigil RPG. In the original 1.0 version of the game, the Tank Goblin was merely a high-armor enemy that mostly served to punish the player if they didn't have one of the armor-penetrating abilities (Sunder! or LIGHTNING BOLT) equipped. Now, while those abilities certainly help, they aren't a hard requirement for beating a Tank Goblin without taking lots of damage.

Q: How do I stop those pesky swamp bats from flying away?

If a bat successfully lands a hit on you, it will fly away. As with most Vigil RPG enemies, the key is to figure out how to avoid letting the monster hit you!

The swamp bats have 3 types of attacks: high, straight, and low.

The bats always do the same one of those three types of attacks on round 1.

Don't forget that you can rest at the nearby Shaman's Hut! It's one of the few places in the game outside of the main town of Arboria where you can regain HP.

Each one of swamp bats' three types of attacks -- high, straight, and low -- can be countered by one of your own types of actions -- spells, attacks, and blocks.

It's up to you to figure out which of your action types counters each of the bat's attacks! (There is a little bit of "common sense" involved, though, so it doesn't need to be pure trial and error!)

At the end of each combat round, there will be a message stating which type of attack the bat will be doing in the next round, so there's no need to guess. It's possible to defeat each bat without taking a hit, once you've figured out the pattern.

In Round 1, and whenever the bat says that it will be attacking "straight", you should defend.

Whenever the bat says that it will be attacking "high", you should use a magic spell.

Whenever the bat says that it will be attacking "low", you should use an attack.

It might be a good idea to equip the Mana Strike attack (if you have it), and/or the relatively inexpensive ICE spell, to help ensure that you always have enough MP to use a spell when needed!

Q: How am I supposed to tell when the Chronogoyf is going to attack me?

The Chronogoyf spends most of its time either just sitting there and rotating, or else poking at you with weak attacks. Every so often, though, and without apparent warning, it'll unleash a very strong attack.

Like the Duagoyf, there is a way to predict when the Chronogoyf will attack, but it isn't based on anything in the combat text, but on something else.

"Chrono-" is a prefix that means time.

The combat round number is a measure of time that's displayed on the combat screen. But the Chronogoyf doesn't always attack on the same round numbers, so it's not that simple.

The Chronogoyf seems to attack about every 5 combat rounds. But which ones?

Is there some other indicator of time that appears on the combat screen that could be related...?

Whenever one of those two situations occurs, the time has come to defend!

Q: The Iron Golem seems to do its rare special attack at random...?

In addition to its regular attacks of performing heavy punches either one or two times in a row, the iron golem rarely will breathe a cloud of poison gas immediately after it is finished punching.

Try looking very carefully at the combat text when the golem is winding up its punch attack(s), to see if you can spot anything out of the ordinary.

Normally, in the combat text, the word "left" or "right" will be highlighted in color in the combat round when the iron golem is winding up.

When that word is not highlighted in color, but is displayed in the plain white color instead, that's your cue that the iron golem is going to breathe poision when it is done punching. Defend to avoid getting poisoned!

Q: Bo the Bartender started attacking me! How do I get him to go back to serving delicious root beer?

You may have, on occasion, spotted the bartender chanting the spell of BREW!

Have you learned that spell yet? If so, have you tried using it while battling Bo...?

The bartender doesn't ever actually attack you! (You don't get to learn the spell of BREW either, sadly -- it's exclusive to the Bartender character class!) Why are you looking at hints that you don't need? 😁

For your trouble, though, here's a real tip: Bo the Bartender has a lot to say, especially as you complete quests, and as you level up. You don't have to repeatedly enter and leave the tavern to hear more of what Bo has to say. Instead, just tap him!

Thanks for reading this FAQ! Have more questions about Vigil RPG that aren't answered here? Hit us up on Twitter at

Otherwise, head on back to the Vigil RPG homepage.